Did you ever see a turtle dancing...?
Watch Daan and klick on the grey words:
Dancing turtle 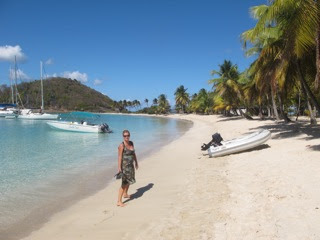 We're in Chatham Bay, Union Island. It's very pretty here! Turtles swimming round the boat, nice little bars on the white sandy beach, snorkling and spearfishing, we can do it all here. Our dinghy had to be repared, so that was a bit unhandy for a couple of days. Can't go anywhere when you're ankering. Fortunately we have friends around us who pick us up. And in two days Maarten repared it again.
"We don't do anything with Valentine", I said to the waitres....not knowing that Maarten and Nick arranged a surprice dinner at that bar that evening for Mell and me. Very nice. They even arranged a big dinghy so the lady's and there dresses wouldn't get wet. It was a perfect evening.
Need to solve some problems back home with our house. Luckaly we got friends and family who're helping us. Meanwhile I get a pregnant looking belly and feel good. We're doing fine here in the Caribbean.

Our cat has defecated on our boat!

It's time to share our big news on our blog--> We're gonna have a baby. I'm 16 weeks pregnant and everything is going well. We've seen the little baby twice on a ultrasound. Everything is already there, little hands, little feet and most important--> the heartbeat. We're very happy with it and of course it's changing our plans a bit. We're not going through the Panama Channel. We were already in doubt of this, because we don't like the big crossings. We decided earlier to see in Suriname if we would still go round the world. We found out in Cape Verde that I was pregnant, so that made our decision very easy: we stay at this side of the world. The plan is to give birth in Bonaire. That's one of the ABC islands. They speak Dutch there, what I like when I'm having my baby. And it's a good place to be in the storm season. So we'll probably be there from June till November. Of course we're already making plans for after that, maybe we go to America, the inter-coastal waterway...but we'll see. That depends on so many things.
First we're gonna be in the Caribbean now, until May.
We're at Grenada now. A beautiful green island. We liked our last anchor-place a lot, next to Prickly Bay, with the Wisper Cove Marina nearby and a nice sandy beach where we could barbecue. Now we're anchoring by St. George. We role a lot at the anchorage. We stay here for a short period, to get some groceries and then move on up North. We're heading to Carriacou, which should be very nice.
Gepost door Maarten & Danielle op 14:15 Geen opmerkingen: